For many years, video formats were essentially the least-complicated home theater topic you could think of. You had a CRT television with a maximum resolution of 480p that was likely hooked up to a VCR (or, if you were lucky, a laserdisc player) and that was about it. Regardless of the size of the TV you had or who made it, a resolution of about 480p was as good as you were going to get. Even in the late 1990s when the DVD revolution took off, things remained largely unchanged.

Flash forward to the modern era and “standard definition” is thankfully a thing of the past. It was replaced first by 720p and 1080p TV sets and now 4K UHD sets are poised to take the world by storm yet again. All of this is terrific in terms of enjoying your favorite films and TV shows in stunning detail, but it can definitely be confusing when trying to put together your ideal home theater. Luckily, many of these terms aren’t nearly as complicated as they may seem at first.

The first thing to understand about high definition video formats is that there are a few wildly different resolutions that are all technically “high definition.” 720p translates to a resolution of 1280 by 720 horizontal lines that make up an image or a display. The “p” stands for “progressive,” which refers to the way all of those lines come together to form images when you’re watching content. This is contrary to “i” or “interlaced.” Progressive resolutions like 720p tend to offer more realistic and smoother motion than their interlaced counterparts, as evidenced by any time you’ve ever tried to watch a DVD or Blu-ray from the United Kingdom and wondered why things looked so… off.

720p is technically high definition because it is literally a “higher definition” than the SD 480p TV sets of yesteryear, but it leaves a bit to be desired in terms of the true HD experience.

1080p content has a resolution of 1920 by 1080 and is the most common video format you’re likely to encounter… for the time being. Blu-ray home video discs have a standard resolution of 1080p and if you’ve got a fast Internet connection, streaming services like Netflix, Hulu and more will offer content in this quality, too. 1080i offers the same 1080 horizontal lines of resolution, but they’re interlaced instead of progressive.

Again: you’ll be able to tell right away if you’re looking at 1080p versus 1080i content by how objects look while they’re in motion. 1080p tends to look much more fluid and natural because of the way that the lines are drawn together to make up the image on screen.

Services like Netflix, YouTube and others will actually have varying resolutions for the same content that depend on a range of different factors. If you’ve got a lightning-fast Internet connection, you can essentially guarantee you’ll be seeing 1080p at all times. However, if your network bandwidth is limited, you may be served a 720p version of the same content to help relieve that “pressure.” You’ll still be getting high definition, but something like Netflix will automatically downgrade the video quality to “make up” for those traffic issues.

Online video games are also typically in 720p instead of 1080p (unless you’re playing on a PC, that is) for largely the same reasons.

The Fuss About 4K

4K is the latest resolution to take home media aficionados by storm. The name refers to the fact that content in this resolution weighs in at 4,000 by 2,000, or about four times the resolution of 1080p “Full HD.” 4K legitimately offers a better viewing experience in a number of ways. For starters, because the resolution is higher the images will be dramatically more detailed. Secondly, the 4K UHD standard (in the case of home video discs) supports benefits like a wider color range, making things look more natural as well.

Many online streaming services like Netflix have begun to film their original programming in 4K. The UHD home video format has also begun its slow rollout, offering essentially a “fancy Blu-ray” capable of displaying a movie in 4K resolution designed with 4K TV sets in mind.

Other Terms to Know: Compatibility, Upward and Downward Scaling

Video format compatibility typically refers to content that is available in a few different resolutions that will be adjusted depending on your playback equipment. If you watch a YouTube video that is listed as having 720p and 1080p resolutions, for example, you’ll be served up 720p version if you’re on a 720p TV set or monitor and a 1080p version if you’re on equivalent equipment.

When it comes to actual physical media, a rule of thumb is that formats are usually backwards compatible, not forward compatible. You can play a Blu-ray on a 4K UHD player, but you can’t play a 4K UHD disc on a Blu-ray player.

If content is downward scaled, it essentially means that you’re seeing a lower resolution than that of the original show or movie you’re trying to watch. If you watch one of Netflix’s 4K shows but you only have a 1080p TV, Netflix will downward scale that content to 1080p resolution because that’s the most your TV can handle. It’ll still look great, just not AS great as it would have on a newer unit.

“Upward scaling” is essentially the reverse. If you put a 1080p Blu-ray on your 4K TV, your TV will actually try to “fill in” some of that missing resolution on the hardware end. It’ll make Blu-ray’s look better, but not as nice as they would be if you were watching the same content in “native” 4K. 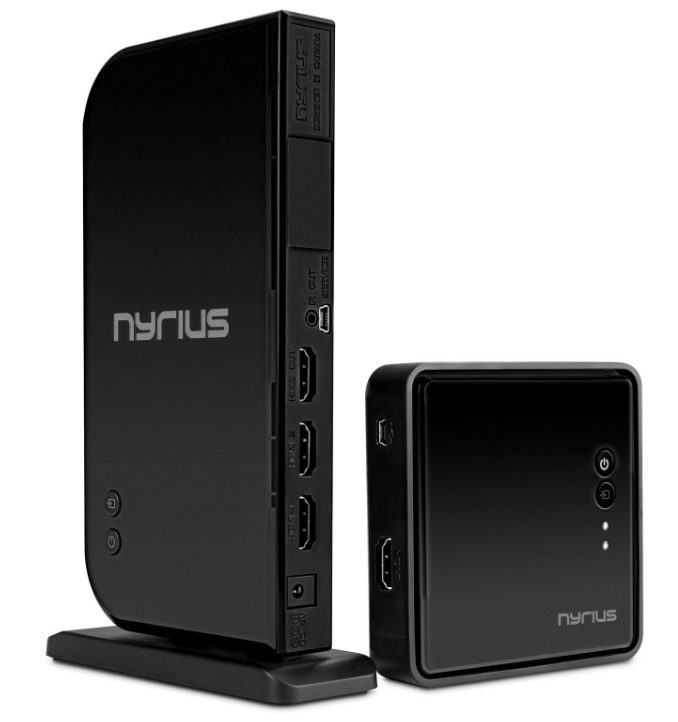 How To Add HDMI Port To PC Desktops Using HDMI Cards
Differences Between HDMI vs DisplayPort – Which is Best?
What is the Best Media Player for Your PC?
What Should You Know Before You Buy a Wireless HDMI Transmitter/Receiv...
Unbox Therapy Tests the Nyrius Aries Pro Wireless HDMI Streaming with ...
Nyrius Aries PRO vs Prime: What’s the Difference Between Nyrius ...
How to Link Your Nyrius Aries Prime Wireless HD Transmitter & Rec...
What does Latency Mean for Wireless Video Streaming?